Advertisement for the Revised Standard Version (1952) 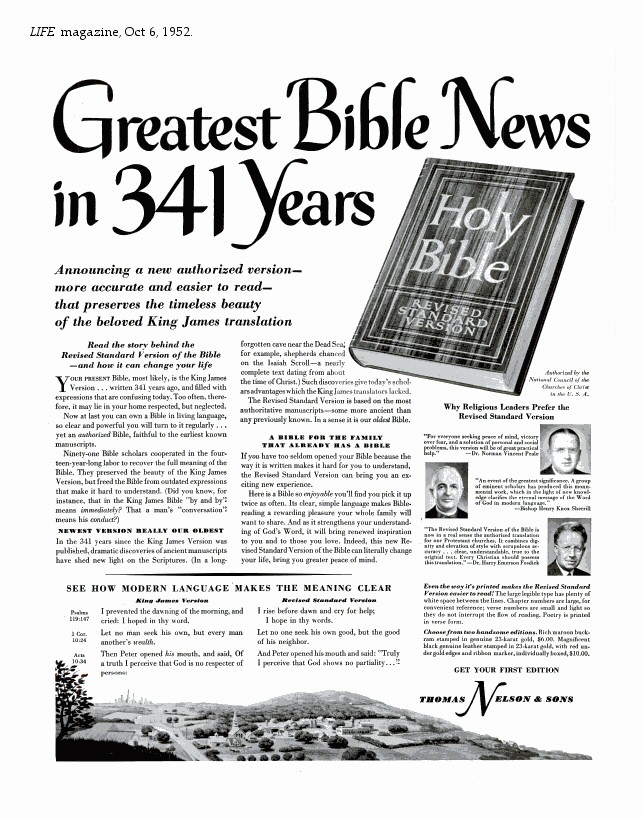 Your present Bible, most likely, is the King James Version ... written 341 years ago, and filled with expressions that are confusing today. Too often, therefore, it may lie in your home respected, but neglected.

Now at last you can own a Bible in living language, so clear and powerful you will turn to it regularly ... yet an authorized Bible, faithful to the earliest known manuscripts.

Ninety-one scholars cooperated in the fourteen-year-long labor to recover the full meaning of the Bible. They preserved the beauty of the King James Version, but freed the Bible from outdated expressions that make it hard to understand. (Did you know, for instance, that in the King James Bible "by and by" means immediately? That a man's "conversation" means his conduct?)

In the 341 years since the King James Version was published, dramatic discoveries of ancient manuscripts have shed new light on the Scriptures. (In a long-forgotten cave near the Dead Sea, for example, shepherds chanced on the Isaiah Scroll—a nearly complete text dating from about the time of Christ.) Such discoveries give today's scholars advantages which the King James translators lacked.

The Revised Standard Version is based on the most authoritative manuscripts—some more ancient than any previously known. In a sense it is our oldest Bible.

THE BIBLE FOR THE FAMILY THAT ALREADY HAS A BIBLE

If you have too seldom opened your Bible because the way it is written makes it hard for you to understand, the Revised Standard Version can bring you and exciting new experience.

Here is a Bible so enjoyable you'll find you pick it up twice as often. Its clear, simple language makes Bible-reading a rewarding pleasure your whole family will want to share. And as it strengthens your understanding of God's Word, it will bring renewed inspiration to you and to those you love. Indeed, this new Revised Standard Version of the Bible can literally change your life, bring you greater peace of mind.

Authorized by the National Council of the Churches of Christ in the U. S. A.

"For everyone seeking peace of mind, victory over fear, and a solution of personal and social problems, this version will be of great practical help." —Dr. Norman Vincent Peale

"An event of the the greatest significance. A group of eminent scholars has produced this monumental work, which in the light of new knowledge clarifies the eternal message of the Word of God in modern language" —Bishop Henry Knox Sherrill

"The Revised Standard Version of the Bible is now in a real sense the authorized translation for our Protestant churches. It combines dignity and elevation of style with scrupulous accuracy ... clear, understandable, true to the original text. Every Christian should possess this translation." —Dr. Harry Emerson Fosdick

Even the way it's printed makes the Revised Standard Version easier to read! The large legible type has plenty of white space between the lines. Chapter numbers are large, for convenient reference; verse numbers are small and light so they do not interrupt the flow of reading. Poetry is printed in verse form.

GET YOUR FIRST EDITION