Works are listed in chronological order within their categories.

1. English Editions of the Apocrypha

The "Apocrypha" consists of the following writings: 1 Esdras, 2 Esdras, Tobit, Judith, Additions to Esther, Wisdom of Solomon, Ecclesiasticus, Additions to Jeremiah (Baruch, Letter of Jeremiah), Additions to Daniel (Prayer of Azariah and Song of the Three Youths, Susannah, Bel and the Dragon), Prayer of Manasseh, 1 Maccabees, and 2 Maccabees.

C.J. Ellicott, ed., The Apocrypha: translated out of the Greek and Latin tongues: being the version set forth A.D. 1611 compared with the most ancient authorities and revised A.D. 1894. (Oxford: Oxford University Press, 1895). This is the version of the Apocrypha done by the translators of the English Revised Version. The preface describes how the work was divided between three small committees, formed from the New Testament Company in 1879, and a fourth committee chosen from the Old Testament Company in 1884. The Americans took no part in the revision of the Apocrypha. The work was completed in 1894, and published early in 1895.

Robert Henry Charles, ed., The Apocrypha and Pseudepigrapha of the Old Testament in English: with Introductions and Critical and Explanatory Notes to the Several Books. 2 vols. (Oxford: Clarendon Press, 1913). Volume 1 contains the Apocrypha, and volume 2 the Pseudepigrapha. This has been the standard scholarly edition of these books for many years, and it is still not superseded. It contains extensive introductions, critical and explanatory notes, and a detailed topical index.

2. English Editions of the Pseudepigrapha

The term "Pseudepigrapha" refers to all non-canonical works of the intertestamental period that are not included in the "Apocrypha."

Robert Henry Charles, ed., The Apocrypha and Pseudepigrapha of the Old Testament in English: with Introductions and Critical and Explanatory Notes to the Several Books. 2 vols. (Oxford: Clarendon Press, 1913). Volume 2 contains the Pseudepigraphal writings, and includes 4 Maccabees, Jubilees, Letter of Aristeas, Books of Adam and Eve, Martyrdom of Isaiah, 1 Enoch, 2 Enoch, Testaments of the Twelve Patriarchs, Sibylline Oracles, Assumption of Moses, Apocalypse of Baruch, Apocalypse of Ezra, Psalms of Solomon, Book of Zadok. (3 Maccabees is given in volume 1.) Although the translations of these are said to be less accurate than the more recent translations edited by J.H. Charlesworth and H.F.D. Sparks (see below), this edition retains its value because of its introductions, notes, and especially its index.

James H. Charlesworth, ed., The Old Testament Pseudepigrapha. 2 vols. (New York: Doubleday, 1983-1985). English translations of 65 pseudepigraphical texts related to the OT, intended as a replacement for the earlier edition of R.H. Charles (see above). Volume 1 contains apocalyptic literature and testaments; vol. 2 has OT expansions and legends, wisdom and philosophical literature, prayers, psalms, odes, and fragments of lost Judeo-Hellenistic works. The translations have been freshly made from the best available critical texts of the pseudepigrapha, but they are very uneven in quality. The brief introductions and notes are much inferior to those in the edition of R.H. Charles.

3. English Editions of the Apostolic Fathers

The "Apostolic Fathers" consists of non-canonical Christian writings up to death of Polycarp (155 AD). Included in this class are the Epistles of Clement, Ignatius, Polycarp, and Barnabas, the Epistle to Diognetus, the Apologies of Aristides and Justin Martyr, the Shepherd of Hermas, and the Didache.

William Wake, ed., The genuine Epistles of the Apostolical Fathers S. Barnabas, S. Ignatius, S. Clement, S. Polycarp. The Shepherd of Hermas, and the Martyrdoms of St. Ignatius and St. Polycarp : written by those who were present at their sufferings, being, together with the Holy Scriptures of the New Testament, a compleat collection of the most primitive antiquity for about CL years after Christ. translated and publish'd, with a large preliminary discourse relating to the several treaties here put together, by W. Wake (London: Printed for Ric. Sare, 1693). Wake was afterwards Archbishop of Canterbury.

Alexander Roberts, James Donaldson, and A. C. Coxe, eds., The Ante-Nicene Fathers: Translations of the Writings of the Fathers down to A.D. 325. Vol. 1. The Apostolic Fathers; Justin Martyr; Irenaeus. (Edinburgh, 1885; reprinted Grand Rapids: Wm. B. Eerdmans, 1953).

"New Testament Apocrypha" refers to early Christian non-canonical writings that are related to the narratives or personalities of the New Testament, and which are not among the "Apostolic Fathers."

Jeremiah Jones, A new and full method of settling the canonical authority of the New Testament : Wherein all the antient testimonies concerning this argument are produced ... In two volumes. By the late Reverend Mr. Jeremiah Jones. 2 vols. (London: Printed for J. Clark and R. Hett at the Bible and Crown in the Poultrey near Cheapside., 1726). A third volume was published in 1727. These volumes contained English translations of several "New Testament Apocrypha" books, including the Protevangelium of James, the Infancy Gospel of Thomas, the Letters of Christ and Abgar, the Gospel of Nicodemus (or the Acts of Pilate), the Epistle of Paul to the Laodiceans, the Correspondence of Paul and Seneca, and the "Acts of Paul and Thecla." 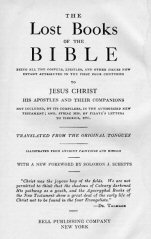 William Hone, ed., The Apocryphal New Testament, being all the Gospels, Epistles, and other Pieces now extant, attributed in the first four Centuries to Jesus Christ, his Apostles, and their Companions, and not included in the New Testament by its Compilers. Translated from the original Tongues, and now first collected into one Volume (London, Printed for William Hone, Ludgate Hill, 1820). In this contoversial book Hone reprinted the apocryphal writings from Jeremiah Jone's New and full method of settling the canonical authority of the New Testament (London, 1726) and the Apostolic Fathers and Shepherd of Hermas from William Wake's Genuine Epistles of the Apostolical Fathers (London, 1693), with some highly misleading prefaces, in which he seemed to credit the apocryphal writings with having as much claim to authenticity as the books of the New Testament itself. It was reviewed very harshly in The Quarterly Review, 25 (July 1821), pp. 347-65. The book has been reprinted many times, more recently under the title, The Lost Books of the Bible. For criticism of this book see the Preface of M.R. James' Apocryphal New Testament (Oxford, 1924) and chapter fifteen of Edgar Goodspeed's Modern Apocrypha (1931, reprinted as Famous Biblical Hoaxes in 1956).

Montague Rhodes James, The Apocryphal New Testament: Being the Apocryphal Gospels, Acts, Epistles, and Apocalypses, with Other Narratives and Fragments Newly Translated (Oxford: Clarendon, 1924; reprinted in 1953 with appendixes by J. W. B. Barns; reprinted 1975.)

J.K. Elliott [James Keith], ed., The Apocryphal New Testament: a Collection of Apocryphal Christian Literature in an English Translation (Oxford: Clarendon Press; New York: Oxford University Press, 1993). This is a reworking of M. R. James' The Apocryphal New Testament (see above). The texts are newly translated in modern English (in contrast to James' deliberate imitation of the language of the Authorized Version), and has more lengthy and detailed introductions and bibliographies to each text. It also adds a small selection of gnostic literature. This edition was published as a companion volume to The Apocryphal Old Testament, edited by H.F.D. Sparks (Oxford, 1985).

James M. Robinson, ed., The Nag Hammadi Library in English (New York: Harper & Row, 1977. 2nd edition with minor additions, 1981. 3rd edition thoroughly revised, 1988). In this volume, 47 short Gnostic tractates in the Coptic language that were discovered at Nag Hammadi in Egypt are translated into English (?) by 38 members of the "Coptic Gnostic Library Project of the Institute for Antiquity and Christianity, Claremont, California." Most of the texts are quite obscure in many places, so that the reader can scarcely make sense of them. Some help is given in the brief introductions to each tractate, but unfortunately the edition provides no annotations whatsoever. Probably the translators themselves were at a loss to explain much of it. The reader may however get from this volume a good idea of how utterly strange and perverse the Gnostic literature was.

George W. E. Nickelsburg, Jewish Literature Between the Bible and the Mishnah: an Historical and Literary Introduction (Philadelphia: Fortress Press, 1981.)

Leonhard Rost, Judaism Outside the Hebrew Canon: An Introduction to the Documents (Nashville: Abingdon Press, 1976).

Adolph von Harnack, Marcion: The gospel of the alien God (Durham, NC: Labyrinth Press, 1990). An English translation of a work first published in German in 1924. This is the classic study of Marcion. Harnack was the first to demonstrate Marcion's significance for the development of the orthodox church.

Bruce M. Metzger, The Canon of the New Testament: Its origin, development and significance (Oxford: Clarendon Press, 1987). This is the standard work on the subject of the canon.