The following discussion of the text-critical problem in John 1:18 is reproduced from Bruce M. Metzger, A Textual Commentary on the Greek New Testament (United Bible Societies, 1971), p. 198.

With the acquisition of P66 and P75, both of which read θεός, the external support of this reading has been notably strengthened. A majority of the Committee regarded the reading μονογενὴς υἱός, which undoubtedly is easier than μονογενὴς θεός, to be the result of scribal assimilation to Jn 3.16, 18; 1 Jn 4.9. The anarthrous use of θεός (cf. 1.1) appears to be more primitive. There is no reason why the article should have been deleted, and when υἱός supplanted θεός it would certainly have been added. The shortest reading, ὁ μονογενής, while attractive because of internal considerations, is too poorly attested for acceptance as the text.

Some modern commentators take μονογενής as a noun and punctuate so as to have three distinct designations of him who makes God known (μονογενής, θεός, ὁ ὢν εἰς τὸν κόλπον τοῦ πατρὸς).

[It is doubtful that the author would have written μονογενὴς θεός, which may be a primitive, transcriptional error in the Alexandrian tradition (Υς/Θς). At least a {D} decision would be preferable. A.W.] 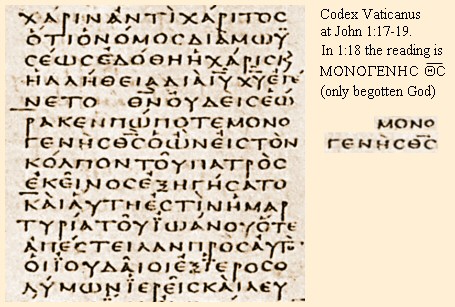